I couldn’t resist this one. SMS has been in play for years now, and yet still overpaid agencies can’t get it right. Please see exhibit A below: 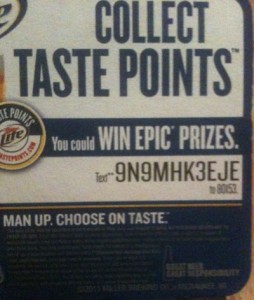 Now, let’s take a look at this. This is obviously a coaster, likely being used in a bar or club to promote Miller’s “Win Epic Prizes” campaign. At a glance we can tell legal got their grubby hands on even the tagline…’epic’ has an asterisk which makes me question the epic-ness of the prizes. I digress.

It doesn’t take more than a middle school degree to realize that the goal of this campaign is to have customers text in – that would likely create a successful campaign. My prediction: the campaign to win epic prizes will be an epic fail.

First let’s look at the keyword, or what we at Mobile Card Cast call the Mobile ID. Not only is it a 10 character Mobile ID, but its mixed alpha-numeric. This will not only strongly deter folks from texting in, but exponentially increase both the possibility of input error and the frustration level of the user – most users will have to toggle between the alpha and numeric keyboard modes during input. Fail #1.

Second, let’s look at the shortcode. OH THAT’S RIGHT, I cant see it either. This is to be used in a bar people, and anyone who’s ever been to a bar can agree that for the most part they’re not the most well lit places on earth. And how about the call to action? The word ‘Text’ is equally illegible. So my question is, what brilliant Creative Director decided to use 8pt condensed font for the shortcode and CTA? Are they giving away free illuminated magnifying glasses to potential participants? Fail #2 and #3.

Rants aside here, you can see why this is categorized in the ‘You’re doing it wrong’ section’. The Mobile ID is cryptic; the shortcode and call to action are illegible in the environment within which they will be viewed. This is why having a strong mobile team on your side is important…it will prevent your ‘epic’ campaigns from becoming ‘epic’ fails.

But hey, at least it will keep the moisture off of the bar.

John's rants on technology, music, work, life, and more. If you're here, you're probably really bored.